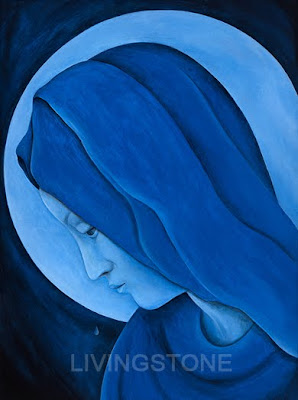 We had our womens’ seasonal sweat lodge ceremony at People of the Heart on Saturday night that honored both the light and the dark within and around us. Appropriate for the season and with so much change happening in our world and feeling bombarded with information about the economy, climate change, natural disasters, and unemployment, it’s no wonder we all let out primal howls. Wailing, releasing the heaviness. Many of us, especially hypersensitive people like myself take in this darkness and carry it around inside, so it was cathartic to release the energy that had been storing up in my body. Releasing in order to open to the lightness of being. After prayers of gratitude and healing were spoken, Rev. Jayna Gieber led us in The Beatles, “Let it Be.” It had been a long time since I really listened to the words of the song. I was moved to tears and saw before me my painting of “Mother Mary.” The Divine Feminine and her words of wisdom are speaking to me, to us all, during these evolutionary times. The question is are we listening?

I would suggest that we the people are indeed beginning to listen. Where the ecological and political movements of the sixties seemed to emerge largely out of sub-groups within society, the new paradigm movements include all of us and those of every generation–young and old. We can see this in the Occupy movement and the spiritual, evolutionary consciousness that is gaining momentum. The stakes are also higher now. Climate change is real. Some would argue these movements are idealistic in the face of the economic and political forces at work today. Perhaps. According to Webster’s, idealism “is a literary or artistic theory or practice that affirms the preeminent value of imagination.” Again, “the value of our imagination.” I would go so far as to say the Divine Imagination–the very source of our creativity. Yes, The Beatles were idealistic. I’m idealistic. Are you? I believe we are all artists in our own way, tapping the holy well of our imagination, therefore we all have the capacity for being idealistic, right? So “imagine” what we are capable of co-creating if we listen to these words of wisdom from the Divine Feminine? There will be an answer. All of our creativity and idealism is needed now. For the future of this planet and all her creatures. For future generations. “Imagine all the people living life in peace…you may say I’m a dreamer, but I’m not the only one. I hope some day you’re join us, and the world will live as one.” (-John Lennon)

For love of the EARTH,