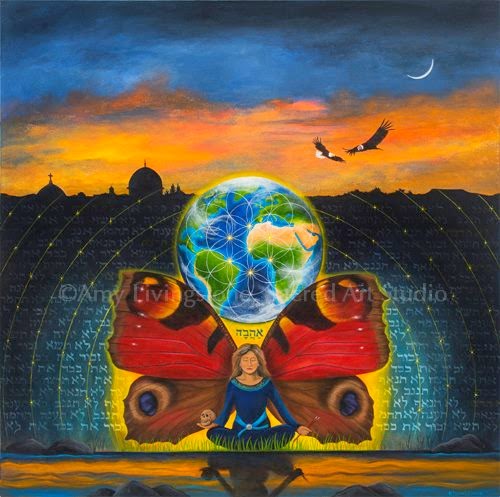 “The Translator”
My latest painting inspired by this poem “Walking the Borders” from William Stafford. (See below) The painting became a sort of self-portrait for me as my work centers around creating a new, visual language through sacred art that illustrates our interconnectedness in the web of creation. You can see her holding in one hand a skull and paint brushes in the other.
Walking the Borders
Sometimes in the evenings a translator walks out
and listens by streams that wander back and forth
across borders. The translator holds a mint
on the tongue, turns it over to try
a new side, then tastes a wild new flavor,
a flavor that enlivens those fading languages
of cursing and calling each other those names
that destroyed millions by swinging a cross
like an ax, or a crescent curved like a knife,
or a star so red it burned its way over the ground.
The wild new flavor fades away too,
but lingers awhile along borders for a translator to savor
secretly, borrowing from both sides, holding
for a moment the smooth round world
in that cool instant of evening before the sun goes down.

The background shows the Ten Commandments, a moral doctrine that for me is the fading language that has separated us from each other and from the Creation. The new language is one of interdependence in the web of life and the coming ecozoic era where we come back into balance as foretold in the ancient prophecy of the Eagle and the Condor, shown flying here wing-to-wing in the sky. In the center, the Hebrew word Ah-ha-VAH translates as Love. (Note: I chose Hebrew as it is the first of the Abrahamic traditions followed by Christianity and Islam.)

Stafford was a pacifist and conscientious objector during WWII. In his poem, he is referencing the Abrahamic traditions: “those fading languages of cursing and calling each other those names that destroyed millions by swinging a cross (Christianity) like an ax, or a crescent (Islam) curved like a knife, or a star (Judaism) so red it burned its way over the ground.” If we look at history, human beings have been killing each other over religious differences for thousands of years. Consider the Crusades, the Inquisition, and the Holocaust. And more recently, the white supremacist who killed three people outside a Jewish community center. So, in going back to the Ten Commandments which inform the Abrahamic faiths and culture on some level even if one is secularist/atheist. I was contemplating the sixth commandment (it’s also in a different color in the painting, though hard to see that at this size) that says “Thou Shalt Not Murder.” So my painting, and the poem, is questioning what it means to live by a doctrine that hasn’t worked to ensure peace among us. I honor all paths to God, the Divine, but the question for me is how do we create a new “language” that recognizes our interconnectedness in the web of creation that puts aside our differences in order to ensure a liveable, peaceful, and sustainable future for life on earth?