From my September Newsletter:
Go, sit upon the lofty hill,
And turn your eyes around,
Where waving woods and waters wild
Do hymn an autumn sound.
The summer sun is faint on them –
The summer flowers depart –
Sit still – as all transform’d to stone,
Except your musing heart.

From The Autumn by Elizabeth Barrett Browning

I welcome the Autumn and the element of water as it begins to rain while writing this message to you. Blessed rain after a long, dry, and hot summer. Though I appreciate the everyday epiphanies of time spent in the outdoors, the garden, and the thrill of growing tomatoes, the turning of the wheel guiding us toward our inner world is my true home. This is a fertile time for our creativity!

Through the summer I have been working on the mandala commission shown above. What I have titled the “Hope Mandala,” was commissioned by a lovely woman, Patti, who lives in the Boston area. It became clear in our exchanges via Skype and email that the universe had conspired to bring us together in order to manifest this work of sacred art that is both personal to her and universal in its message–hope and interconnectedness.

When I asked what she wanted to feel when looking at her mandala, she said hope and inner strength to preserve in her meditation practice. It became clear to her to dedicate her practice to the healing of the earth. I was thrilled that we shared this common vision and when I unveiled her mandala this week, she wept. The highest compliment I can receive for my work as it has touched the soul and why I refer to these commissions as soul-symbol mandalas. Learn more here.

Her chanting of the Great Compassion Mantra (Da Bei Zhou) immediately inspired my vision of Kuan Yin, Bodhisattva of Compassion, or She Who Hears the Cries of the World, to be at the heart of the mandala or yantra. Here, she holds the willow sprinkling the divine nectar of compassion and healing on our beloved mother earth. Behind her, the Taoist symbol of yin/yang symbolizes her dual nature/paths in life: The yang/masculine side as a finance person (represented by the mother board texture). The yin/feminine aspect of your Spiritual Self, who feels connected to the universe as represented by the Gemini constellation, her astrological sign (the twins reinforce her dual nature).

On a macrocosmic scale, these also symbolize the ways in which we are all interconnected in the web of life. Through our technology, our cosmology, and globally as expressed with the longitude/latitude, or energy meridian, that holds the mandala. We are indeed one.

The flowers in the thresholds at each of the four cardinal directions symbolize hope, healing, clarity of vision, and courage/devotion. As a Chinese American woman, I included the kanji which translates as hope. 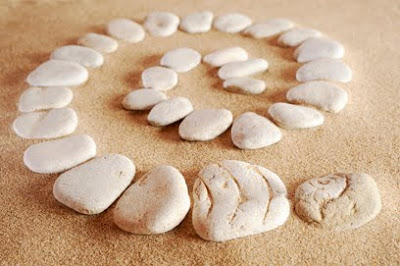 What does it mean to be a contemplative in the modern world? Most often people associate contemplative living with the austerity and isolation of a monastery. At one time, that was true. Although there are still monastic communities around the globe, many of today’s contemplatives participate in the world but bring with them a deep sense of reverence for life, the Holy, into daily life. Like the mystics from all spiritual traditions, there exists an an awareness of the numinous presence that infuses every aspect of our lives. While Buddhist teachings and meditation guide me in deepening my awareness into the present moment, two teachers that also speak to me around contemplative living are Caroline Myss and the late Thomas Merton. In her book “Entering the Castle,” Myss offers a guidebook for answering the call of the soul and she coins the phrase “Mystics without Monasteries” to describe this new way of being in the world. Click here for an excerpt from her book.

And in “New Seeds of Contemplation,” Merton writes: “Contemplation is the highest expression of man’s intellectual and spiritual life. It is that life itself, fully awake, fully active, fully aware that it is alive. It is spiritual wonder. It is spontaneous awe at the sacredness of life, of being. It is gratitude for life, for awareness, and for being. It is a vivid realization of the fact that life and being in us proceed from an invisible, transcendent and infinitely abundant Source. Contemplation is, above all, an awareness of the reality of that Source.” Click here for more on Merton.

Living a contemplative life doesn’t require that we renounce the world but it does require choosing a new way of being in the world. Slowing down, unplugging from the technology (at least periodically), and learning to be with the silence in order to create space for encountering what Merton called the “spontaneous awe at the sacredness of life.” Why is this important to those of us who live in the 21st century? As we know, we live in a fast-paced and enormously stressful world. Carving out time in our personal lives for contemplation can open up new possibilities that nurture our spiritual life, our creativity, our relationships (to each other and to the Earth) and bring more calm into our daily lives. I’ve walked the stressed-out, workaholic lifestyle and know that world, too. For all the uncertainty that may come with following my soul’s calling, every day I wake feeling grateful…for life, for beauty, for this present moment…which is all we ever truly have.

I live much of my day in silence, except for the abundant birdsong coming in from the garden, but this may not be possible for those with the demands of family and workplace. So, where to begin if you are just starting out? I recently heard spiritual teacher August Gold interviewed and thought she had a great framework in starting a practice if you don’t have one. She suggests beginning every day with 15 minutes in this way:

· 5 minutes reading inspirational materials
· 5 minutes journaling what is most alive in your heart
· 5 minutes of silent sitting (no TV, radio, computers!)

I would also add, 5 minutes of sketching, doodling, or collaging to tap into your creative source!

From my August Newsletter sent earlier in the month. I hope you all have been enjoying the lazy days of summer this month. So grateful for beloved rain this week here in Portland!

Who made the world?
Who made the swan, and the black bear?
Who made the grasshopper?
This grasshopper, I mean-
the one who has flung herself out of the grass,
the one who is eating sugar out of my hand,
who is moving her jaws back and forth instead
of up and down-
who is gazing around with her enormous
and complicated eyes.
Now she lifts her pale forearms and thoroughly
washes her face.
Now she snaps her wings open, and floats away.
I don’t know exactly what a prayer is.
I do know how to pay attention, how to fall down
into the grass, how to kneel down in the grass,
how to be idle and blessed, how to stroll
through the fields,
which is what I have been doing all day.
Tell me, what else should I have done?
Doesn’t everything die at last, and too soon?
Tell me, what is it you plan to do
with your one wild and precious life?

Greetings Earth Lovers
I have shared this poem before but love it so and it seems appropriate for those of us in the Northern Hemisphere during the last of these summer days. We have had little rain here in Portland and am ready to welcome back the water element as we head into the fall next month.

August is typically a month for playing, lazy days, and vacations for many, so I am keeping this month’s newsletter brief. I haven’t traveled myself but am taking days to just be idle and ‘pay attention’ as Oliver invites us to do. For all you Mary Oliver fans out there, you can listen to a rare and wonderful interview with her at OnBeing with Krista Tippett at this link.

New works are slowly progressing in the studio and I have been hired to illustrate a book that brings a spiritual component to psychotherapy which I believe is so necessary. It’s a gift to serve our world in this way.

About the Painting:
The sweet little painting shown here, Sundara (12×12″) sold to a woman in Australia and is heading Down Under today. Butterflies, the quintessential symbol of transformation, have been appearing in my art since I was a teenager and sense this animal totem came to me during a near death experience from appendicitis when I was 17. Sundara is Sanskrit for beauty (the beautiful). “When we awaken to the call of beauty, we become aware of new ways of being in the world.” -John O’Donohue. Stay connected and see new works in progress between newsletters at Facebook and Twitter.

In closing, last month I shared with you my recent connection with Renée Phillips with The Healing Power of ART & ARTISTS,  an initiative of Manhattan Arts International based in NYC. Wonderful collection of artists whose works is contributing to the healing of our world. You can view my profile and other artists at this link. I am also contributing three short articles for her blog. The second is around the Nature Mandala Ceremony. If you would like to learn more about the intention and inspiration behind the ceremony, click here. The first piece, “Re-visioning our Holy Earth,” can be read here.

Enjoy this one wild and precious day of life,