“Finding beauty in a broken world is creating beauty in the world we find.” -Terry Tempest Williams
From my January Newsletter:
This from Williams’ 2008 powerful and heart-opening book, Finding Beauty in a Broken World. She details her journey from Ravenna, Italy, to the American SW, and to Rwanda where she helps build a genocide memorial with the survivors of the war. She follows the thread of a calling to follow one wild word–mosaic. She writes: “Mosaic celebrates brokenness and the beauty of being brought together.”

I was reminded of her book again after finishing the painting shown here, “Resurrection.” Although most would associate the word or concept with the resurrection of Christ, I am using the word in context with the necessary and emerging return of the ancient paradigm associated with our indigenous ancestors and the Divine Feminine of the Goddess tradition, prior to the rise of patriarchy. Although I would also suggest that Christ is likewise an embodiment of the feminine with his original message of inclusivity and love for the neighbor and stranger.

Holy mother earth with the ‘seed of life’ nestled in the heart of  the web of life is cracking and we desperately need the return of the divine feminine even more so given the recent rhetoric coming forward during the GOP presidential campaign against women, people of color, those of the Islamic tradition, and the earth herself. Fear breeding more separation. And yet, I know also that there are so many of us, you and me, making a difference every day in our world through our creativity and in our communities. Shining your light bright as I wrote about in last month’s newsletter!

From Amazon: “In her compassionate meditation on how nature and humans both collide and connect, Williams affirms a reverence for all life, and constructs a narrative of hopeful acts, taking that which is broken and creating something whole.”

Butterflies = transformation. Life. Death. Beauty. Preciousness of life. Bowie. Rickman. Frey. Levine. Icons and teachers. So breathing into the complexities of life  and in my heart, and piecing together a mosaic of beauty in a broken world.

As always, I welcome your thoughts.

A blessed and wildly creative new year to you,

From my November Newsletter:
In our sleep,
pain which cannot forget
falls drop by drop
upon the heart
until, in our own despair,
against our will,
comes wisdom
through the awful
grace of God.
-Aeschylus

Dear Friends:
I first discovered this quote from the Greek tragedian Aeschylus while doing research in graduate school a decade ago. Robert Kennedy had recited this to a crowd during a campaign stop upon hearing of the assassination of Martin Luther King in 1968. Kennedy was speaking to a grieving nation and it also resonated deeply with my own grief journey after the deaths of my brother and mother 25 years ago.

If we don’t turn away and numb the pain, those profound moments of loss that we all experience have the power to break open our hearts and to remind us of that which is most essential. Love, family (biological or chosen), health, community…a peaceful, sustainable, and just world. And for me, beauty and art of course.

Today, in the wake of the recent terrorist attacks in Paris and the abhorrent backlash against those of the Islamic faith, most of whom likewise desire a safe home, food on the table, and a peaceful world, may we have the wisdom to recognize that we are one human family.

I continue to be inspired by my experience at the Parliament of World Religions last month with so many inspiring visionaries from all faith traditions. A Sikh woman, Valerie Kaur, spoke of Revolutionary Love. I’m attaching the video link here and hope that you will be equally as inspired by her message.

Like many of you, I feel deeply the heaviness of our world but give thanks for this precious gift of life in all its complexities and possibilities. Thank you for your support and as always, I welcome your thoughts.

A blessed Thanksgiving to all.

In gratitude and love,
Amy

From my October newsletter:
I returned home from the Parliament of World Religions in Salt Lake City a week ago but my heart is still in Utah with the 10,0000 people who attended the Parliament. Ten thousand men, women, and children/youth from 80 countries and 50 faith traditions ranging from indigenous, goddess, pagan, Jewish, Christian, Muslim, Sikh, Jain, B’ahai, Buddhist, Hindu, artists, activists, priestesses, and healers. All in agreement to the holiness of our sacred container where love and compassion were generated in our honoring of diversity while recognizing the common threads of our shared humanity. I felt that I traveled the world in five days and found a home. A tribe. The theme this year was centered around “Reclaiming the Heart of Our Humanity.”

The Ute tribe of Utah welcomed us to their ancestral lands and our indigenous brothers and sisters lit a sacred fire that burned throughout the Parliament. There was much praying, chanting, singing, dancing, a Cosmic Mass, and ceremonies but many tears were shed as well as we listened and bore witness to the numerous crises of our time. Religious extremism, social and economic inequality, climate change, and the rights of women and indigenous peoples.

The message was clear, people of faith (wouldn’t that be all of us?) have a moral obligation to step up and take action. Every plenary, every talk I attended addressed the urgency of this critical time and that we each have a role to play. Large and small. It was affirming of my work as a sacred artist and activist and returned energized to continue my mission in service to Mother Earth and all beings that began a decade ago.

What is calling you during this evolutionary time?

There were so many powerful moments and presenters, many whose work I have followed for years including Vandana Shiva, Terry Tempest Williams, Jean Shinoda Bolen, Marianne Williamson, Karen Armstrong, Jane Goodall, and the Dali Lama who spoke to us via satellite. The indigenous plenary was one of the most profound and moving. An elder from Greenland told us that the ice is melting and there is nothing we can do about it. He was looking for the one hope for future generations. I don’t know that I can ever forget his wailing song to the ancestors who we will need if we are to survive the future.

It is a good time with Sawhain (Halloween) this week to honor and welcome back your ancestors.

Our time together was an urgent call but it was surprisingly filled with hope. So many people on the ground doing the Great Work for other beings, human and non-human, and our beloved Mother Earth, Gaia, Pachamama.

I’ve been working on this new painting since my return. Our fragile world is cracking and transformation is assured. What will our world look like in 20 years? What part are you playing or will play in this Great Turning? “Finding beauty in a broken world is creating beauty in the world we find.” -Terry Tempest Williams.

As always, I welcome your thoughts.

For love of the EARTH! 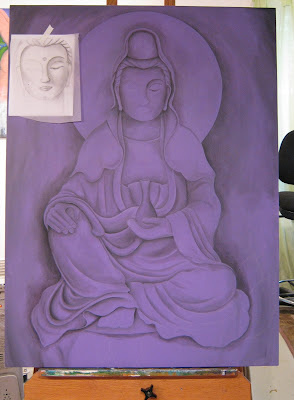 Slow pace in the studio these days as is the rhythm of the Earth in winter. Kuan Yin is my muse as I continue bringing her to life on the canvas. Goddess of compassion, “She Who Hears the Cries of the World.” Listening to Jennifer Berezan’s “She Carries Me,” a long chant to Kuan Yin and the Divine Mother, while I work—evoking the energy and compassion of this bodhisattva.