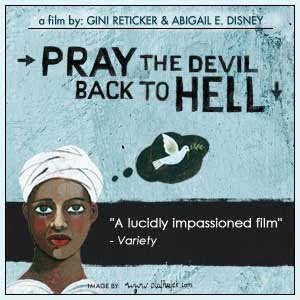 Pray the Devil Back to Hell.

I watched this documentary yesterday and it is a must see for anyone who believes that they have no power to change their circumstances and, on a larger scale, the world. After decades of civil war wherein systematic rape, unimaginable violence, and poverty permeated their lives, the women of Liberia (both Christian and Muslim) came together to stand for peace. It is heart-wrenching to bear witness to the suffering shown through interviews and archival footage and awe-inspiring to see these women not only end the civil war but get the first female head of state elected to an African country. I was both weeping and cheering by the end.

From the web site:
Thousands of women — ordinary mothers, grandmothers, aunts and daughters, both Christian and Muslim — came together to pray for peace and then staged a silent protest outside of the Presidential Palace. Armed only with white T-shirts and the courage of their convictions, they demanded a resolution to the country’s civil war. Their actions were a critical element in bringing about a agreement during the stalled peace talks. A story of sacrifice, unity and transcendence, Pray the Devil Back to Hell honors the strength and perseverance of the women of Liberia. Inspiring, uplifting, and most of all motivating, it is a compelling testimony of how grassroots activism can alter the history of nations.

Their story gives new meaning to what Margaret Mead said: “Never underestimate the power of a small group of committed citizens to change the world. Indeed, it has never been done otherwise.” The women of Liberia, the Suffragettes who fought to guarantee women the constitutional right to vote, Gandhi’s non-violent actions to end British colonialism, and or course, Martin Luther King and the civil rights movement. Jesus’ message of love for all beings. Great moments in history that often took decades of committed citizens to alter the course of history. They were (extra)ordinary citizens who stood up and challenged the status quo and, tragically, many often paid the ultimate price with their own life. We are more powerful than we know. Lest not forget that especially now with all the political rhetoric saturating our airwaves during this election season. It is still business as usual for those in power but we the people, have the power to change our world. This film was a reminder to me of that. I don’t get political in my blog but I’m feeling passionate enough after seeing this film to speak out. I’d like to see our grandmothers, mothers, daughters, and our sisters from all faith traditions join the 13 Indigenous Grandmothers and storm Washington DC to stand up for the Earth and all her creatures. Demand from our leaders immediate legislation that would force corporations and individuals here and abroad to reduce carbon emissions and begin the move towards sustainable energy now. Global climate change is a reality and we have no time to lose. For love of the earth, and for our children and their children’s children…may it be so.

350.org and Four Years Go are also two grassroots organizations that are doing amazing work on the ground to make this transition happen. Get involved for the 10/10/10 work party with 350.org! Read an article on the difference between men and women on global climate change. 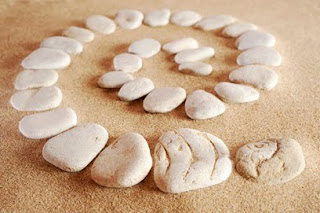 Co-creating with the 4 Elements
A special day for women seeking to explore the connection
between nature, spirituality, and creativity

Nourish your soul with a day where you can slow down and enter into a sanctuary of contemplation and creativity. Drawing inspiration from the natural world and the four elements of earth/air/fire/water, we will explore the inter-relationship of these elemental energies within the cycles of the seasons and the four stages of a woman’s life. Learn how remembering the ancient wisdom of our ancestors can deepen your connection to the natural world, open new pathways for experiencing your place within the web of life, and inspire your own creativity. Earth, or Gaia, will be our muse for the day as we journey around the wheel of creation and co-create in sacred circle.

Drawing from the earth-honoring traditions and the Four Paths of Creation Spirituality, the day will include group sharing, play, meditation, contemplative practices, and the creative process. Take away practices that can guide you on your soul path and provide meaningful ways for you to restore your spirit throughout the year.

Directions and what to bring will be provided upon registration.
Space is limited.